Fun-Filled Day for Kids at The Rockpools 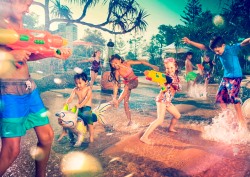 Kids are so blessed with great energy that they need to channel it somewhere or to something all the time. So on your trip to Runaway Bay, don’t let your children miss out on playing every time they want.

With that, once you’re on the Gold Coast, you better head to Southport Broadwater Parklands off Marine Parade in Southport for its The Rockpools Water Playground.

Situated in the world class Southport Broadwater Parklands, The Rockpools will make your kids ecstatic as they go around the place filled with the calming water and trees. Your kids will particularly enjoy the animal statues and the water jets which they can excitedly climb on. Don’t worry, though, about your kids’ safety because the water is shallow, they can merely wade in happiness in them. So all you’re left to do is watch them as they have fun roaming all around the place. Better yet, you can join them for added enjoyment and laughter.

At the southern ends of the parklands, each of your kids can further their excitement as they jump on the huge pillow and take a ride on the pedal trains and even bicycles in the bike racing track.

More fun and comfort are in for you in The Rockpools as you take advantage of its other facilities such as boardwalk, BMX, boat ramp, fenced playground, picnic shelter, picnic tables, scooter facility, walking tracks, water tap, drinking fountain, and even showers, toilets, plus the amazing picturesque view.

If you won’t have enough time to pack some food, rest assured that your tummies will be well taken care of in this place because 40 metres away from the playground is the Rockpool Café, and right across the Gold Coast Highway is the Australia Fair Shopping Centre where loads of restaurants serving great dishes are all over the place.

Even the parking space for your car won’t be a problem in the parklands because there’s a huge carpark available nearby The Rockpools.

WHY STAY WITH US

Two Outside Pools, one with a Cool Water Side Spa

Two Sauna's in the Tower

Footsteps to the Waters Edge

We invite you to relax and soak in the sunshine at our luxury Gold Coast resort.